The Belle of Broadway & Friends

[one_third]Tony-nominated as the original “Belle” in Beauty and the Beast, critically-acclaimed as “Sally Bowles” in Cabaret, and NY’s latest Thoroughly Modern Millie, to name a few, Susan is one of Broadway’s most celebrated contemporary performers.  Her solo career has now spanned more than a decade and hundreds of appearances over multiple continents, winning the hearts of audiences and critics alike!
Susan will take you on a fast-paced journey with hilarious anecdotes and magnificent music and one of the highlights of the night will include Susan performing with Santa Susana High School students that have participated in a Master Class with her![/one_third][one_third]

SAVE THE DATE
SEATING IS LIMITED
TICKETS GO ON SALE 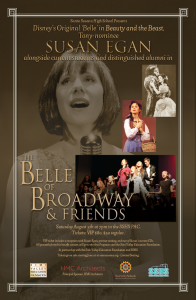 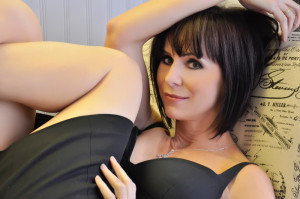 Susan Egan has traversed all four corners of the entertainment industry, making powerful impressions in theatre, film, television and music.   She was last seen on Broadway in the title role of Thoroughly Modern Millie; she won critical acclaim as Broadway’s (longest-running) “Sally Bowles” in Cabaret; originated the starring roles in Triumph of Love and State Fair; and most notably, received both Tony Award® and Drama Desk® nominations for “Best Actress” as Broadway’s original “Belle” in Disney’s Beauty and the Beast. Among her regional credits, Egan starred alongside Carol Burnett in Sondheim’s Putting It Together, Tommy Tune in the national tour of Bye, Bye Birdie, reprised her role of “Belle” for the Los Angeles premiere of Beauty and the Beast, and developed works at Yale Rep, Baltimore Center Stage, South Coast Rep, and the Mark Taper Forum.
Susan’s film credits include 13 Going on 30, Gotta Kick It Up for the Disney Channel, and many award-winning independent films such as: Meet Market (Sarasota Film Festival), Death and Texas (Seattle Film Festival and Slamdance Film Festival), The Almost Guys (HBO Comedy Festival), The Disappearing Girl Trick, Falling. In Love, Extreme Close Up, and Man of the Century (Audience Award, Slamdance).
In animation, Egan gave the sultry voice to ‘Meg’ in Disney’s Hercules, sang the role of ‘Angel’ in Lady and the Tramp II, translated two Japanese blockbusters into English for famed animation director Hayao Miyazaki: ‘Gina’ in Porco Rosso, and ‘Lin’ in Spirited Away, which won an Academy Award® for Best Animated Feature. She spent 6 years as the voice of ‘Belle’ for myriad Disney Princess CDs and toys, and most recently voiced the character of ‘Ginny’ in Achmed Saves America, starring comic Jeff Dunham, and currently recurs as ‘Rose Quartz’ on Cartoon Network’s Steven Universe.
On television, Egan spent two seasons on the WB’s Nikki, and has guest-starred on HOUSE, NUMB3RS, NYPD Blue, Arliss, Party of Five, Drew Carey, Almost Perfect, Partners, All My Children, Loving, and Great Performances: Rodgers and Hart, as well as pilots, movies of the week and specials for ABC, CBS, and the Disney Channel.
As a solo artist, Susan has taken her critically-acclaimed, concert to over 400 cities coast to coast and on the high seas with the Disney Cruise Line.  She has headlined with over 50 world-renowned symphonies, including the National Symphony Orchestra, Hong Kong Symphony, Los Angeles Philharmonic, Chicago Symphony, Hollywood Bowl Orchestra, Cleveland Orchestra, San Francisco Symphony, Seattle Symphony, the Philly Pops, and others, taking the concert stage at Lincoln Center, Carnegie Hall, the Kennedy Center and the Hollywood Bowl just to name a few.
Egan is a Southern California native and attended the Orange County School of the Arts and UCLA, where she received a Carol Burnett Award in Musical Theatre.  In 2002-2003, she devoted a year away from her career to assume the position of interim Artistic Director of the Orange County School of the Arts, and now splits her time as concert performer, master teacher in music performance, obsessive gardener, happy wife, and leader to her daughters’ two Girl Scout troops. www.SusanEgan.net, @IAmSusanEgan, Facebook.com/OfficialSusanEgan.